Inside video of the accident.

A plane carrying parachutists crashed in the municipality of Igarassu, PE. The aircraft broke in half and the occupants suffered mild to moderate injuries. 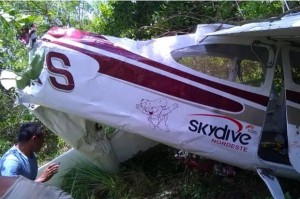 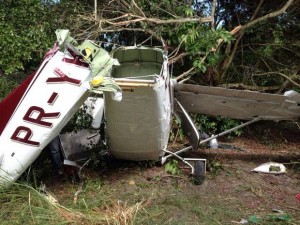 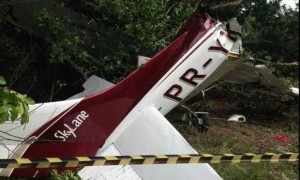 According to the pilot, he was attempting a soft field landing on runway 27. Following a stable approach and landing, a gust of wind was encountered. The airplane veered to the right and the pilot was unable to stop the airplane before the right wing struck a wind sock pole. An inspector from the Federal Aviation Administration examined the airplane and confirmed substantial damage to the right wing. The pilot reported no pre-impact mechanical malfunctions or failures with the airplane that would have precluded normal operation.

While climbing through 2,500 feet after takeoff, the pilot observed a red-tailed hawk approaching the airplane from below. The hawk impacted the left wing, and the pilot elected to perform a precautionary landing. The airplane subsequently landed without incident. Postaccident examination by a Federal Aviation Administration inspector revealed substantial damage to the left wing.

According to the pilot’s report, he leveled the airplane about 11,000 feet and established a speed of 80 mph with 10 degrees of flaps extended. When the last skydiver exited the airplane, its nose pitched up. The pilot pushed forwarded on the control wheel and added full engine power

On June 1, 2014, about 1400 eastern daylight time, an employee from the fixed base operator responding to a DeHavilland DHC-6-200 airplane, N223AL, received fatal injuries when she was struck by an operating propeller blade as she walked toward the cockpit while the airplane was standing on a ramp at the Middletown Regional Airport/Hook Field (MWO), near Middletown, Ohio. The airplane sustained minor propeller damage. The airplane was registered to and operated by Win Win Aviation Inc. under the provisions of 14 Code of Federal Regulations Part 91 as a skydiving flight. Day visual flight rules conditions prevailed at the time of the accident and the flight was not operating on a flight plan. The local skydiving flight was standing on the MWO ramp while waiting for passengers to board when the accident occurred.

The pilot stated that the purpose of the flight was to make numerous takeoffs and transport skydivers to an adequate jumping altitude. The first takeoff was uneventful, and after the skydivers egressed the airplane, the pilot returned back to the airport. During the landing, the airplane bounced three times down the runway.

Three people jumped to safety from a plummeting aircraft before a fiery crash which killed eight skydivers, according to officials in Finland.

The survivors suffered only minor injuries after parachuting from the American-made Comp Air 8 kit light aircraft before it hit the ground and burst into flames, The Helsinki Times reported Monday. The pilot was among those who escaped.

The incident happened Sunday above the Jamijarvi airfield, some 130 miles from Helsinki.

Investigators have recovered the helmet camera from one of the parachutists involved although it is not clear whether it will help them with their investigation, The Helsinki Times reported.

Detective Superintendent Petri Kangas said an eyewitness had reported seeing a large piece of the aircraft fall off before it crashed.

“[The witness] was unable to tell whether it was a wing or another part,” Kangas told the newspaper.

On February 9, 2014, about 1700 central standard time, a Cessna 182A airplane
nosed over during a forced landing while on final approach to land at the
Lexington Airfield (TE75), Lexington, Texas. The pilot was not injured. The
airplane received substantial damage to the firewall and rudder.

Flipped over during forced landing following loss of engine power.