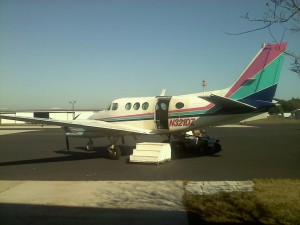 The Beechcraft King Air series started out life as the piston powered Queen Air, with roots back to the famous, and still in commercial use, Beech 18.  The prototype King Air BE-65-90 was test flown in May of 1963 and various models are still in production.  The original King Air was powered by the brand new Pratt & Whitney Canada PT6A-6 engine.  This was a non-reversing, reverse flow turbo-prop of 500 horsepower.  The King Air was the launch customer for the most popular turbo prop engine of all time, the Pratt & Whitney PT6.

Beechcraft did the design certification for flight with the door removed at the request of the military on the 90s (EXCEPT the T tailed F90), 99, 100 and 200.  Short research on where to obtain the FAA Form 337 for your aircraft is necessary to fly with the door removed.  It should list the operating limitations and instructions for continued airworthiness applicable to your aircraft.

The “stock” engine is of course the PT6A-20 flat rated to 550 SHP.  This has a torque redline of 1315 pounds.  Common upgrades are the Blackhawk mod which has PT6A-135A engines de-rated to 550 SHP.  They allow almost full torque to very high altitudes.  The West Tennessee (I think*) conversion replaces the stock engines with PT6A-27s or 28s also rated at 550 SHP max.  There are also a few Taurus 90s which are equipped with either the -28 rated at 680 SHP or -135s rated at the full 750 SHP.  These airplanes have structural modifications that allow full power to be used for takeoff.  There were less than 30 Taurus 90s built by Jet Crafters (Sino Sweringen).  The Taurus 90 with -135s will climb with 15 jumpers to 17,999’ in less than 9 minutes and burn just less than 20 gallons of fuel per load!  The average stock King Air 90 will haul 15 jumpers to 13,500’ in about 10-15 minutes and burn anywhere from 20-30 gallons of fuel per load depending on engine performance and density altitude.  Start out conservative on fueling to make sure you know how much fuel you typically burn per load.

King Air 90s are known for having a narrow exit door and low horizontal stabilizer.  Care must be given to brief jumpers not to exit until the aircraft is fully configured on jump run.  Under NO circumstances should jumpers exit while the aircraft is still climbing!

The vast majority of King Air 90’s will hold up to 15 jumpers.  That load will vary based on runway length, outside air temperature, engine performance and fuel load.  Weight and balance is not normally a big issue.  Generally, load from the wing spar area forward and aft evenly.  If the load is light have the jumpers spread out somewhat evenly on either side of the wing spar box.  Avoid having anyone sitting back to the rear bulkhead until you get above 3000-5000 feet.

The King Air is not a real maintenance heavy aircraft when flown conservatively and maintained properly.  Observe airspeed limitations on gear and flap extension and they will have a long life.  Inspect them regularly.

Flaps set 25%.  If your aircraft is equipped with auto feather arm it before takeoff and then disarm it out of 3000 AGL.  Set torque 100-200 pounds less than redline (1315).  As airspeed increases torque will rise due to ram effect.  It is operator preference to use high idle however many King Air operators don’t unless they are operating out of relatively short airfields.  Rotate positively at around 100 kts.  Retract the gear at a positive rate of climb (Beech says “immediately”), and attain climb speed about blue line which is 125 KIAS.  Retract flaps at 1000’ AGL and props back to 2000 rpm.  Now climb at 130-135 KIAS depending on weight.

NO ONE jumps without flaps extended!!!  This will raise the horizontal stabilizer relative to the exiting jumper.  Many collisions have happened due to contact with the horizontal stabilizer.  At 2 NM prior to the signal for door open.  1 NM prior to climb out set flaps to 25% (approach setting).  Right before the spot set flaps to 60% and flight idle both engines.  A shallow descent will be necessary to maintain jump run speed.  Signal for the climb out.  You should be at about 85 kts IAS with a full load.  You will find a pretty good pitch moment when jumpers exit for two reasons: 1) floaters will block airflow over the elevator and 2) the obvious CG shift.  The King Air is quite honest and handles well.  As the load gets lighter you can slow but it is pilot preference.  If you want to maintain altitude during exit use about 600 lbs. of torque on the right engine.  It should be enough but you will have heavy cross controlling (right rudder and left aileron).

addition DD.com: There seems to be varying degrees of ways to set power for jump run.  ALL agree you need to set flaps to 60%.  If you are launching a large way with many floaters a pilot suggested that 400 lbs. of torque on both engines worked well, lost little altitude and did not cause so much prop blast as to draw complaints from a launching 8-way team.  Jump run entry speed is 90 KIAS decreasing to 85 by the time the group launch.

Set power levers to idle, flaps up and 190 KIAS.  VERIFY the flaps retracted by looking over your shoulder.  Redline with the door removed is 205 KIAS so give yourself some margin in descent speed.  You should see descent rates in excess of 6000 FPM.

Enter the pattern and aim to be abeam your touchdown point pattern altitude.  For turbine aircraft that is 1,500 above field elevation.  As the speed drops below 130 kts extend the landing gear and add flaps.  Use Approach speed of 100 KIAS at the threshold.  Easy on the reverse below 60 kts to reduce prop blade erosion.

The King Air 90 has four fuel tanks: two nacelle and two wing tanks.  Full fuel in the nacelles will yield 3-4 loads.  DO NOT depart with 15 jumpers to full altitude with less than ½ full nacelle tanks.  Don’t push it.  If you NEED to fly 4 loads and it is going to be close put 10-15 gallons in each wing tank to give you the reserves you should have.

The most important thing to remember in the Beech King Air is PUT THE LANDING GEAR DOWN!