The pilot in the tricycle-gear-equipped airplane reported that he landed about 4 ft short of the asphalt
runway. The nose landing gear struck the 6-inch-high asphalt perimeter and separated from the airplane.
The pilot aborted the landing, the airplane bounced, and the pilot established a climb. He completed one
traffic pattern and an approach. During the second landing, the pilot chose to land on the turf safety area
parallel to the runway. When the airplane’s main landing gear touched down on the turf surface, the
airplane nosed over. The airplane sustained substantial damage to the firewall, fuselage, left wing, and
empennage.

The skydiving airplane was on a ramp with its engines operating while the pilot waited for passengers to
board. The pilot asked an employee of the skydiving operator if he could order something to eat for
lunch. The employee responded that she had time to come see the pilot at the airplane because she was
expecting a small delay before the next flight. The pilot thought the delay was not long enough to justify
shutting down the engines. The pilot observed the employee exit the manifest office and run toward the
airplane. The skydiving operator typically flew single-engine airplanes with the propeller located in
front of the cockpit; however, the accident airplane was a twin-engine airplane with its propellers
located under each wing. The operator’s employee subsequently walked into the operating propeller
under the airplane’s left wing, sustaining fatal injuries.

The commercial pilot said he applied full power to go around after a bounced landing. Torque
generated by the turboprop engine pulled the airplane to the right, and the pilot stated that he
was unable to arrest the turn. The airplane collided with trees, resulting in substantial damage
to the right wing, fuselage, vertical stabilizer, both horizontal stabilizers, and the rudder. The
pilot reported there were no mechanical malfunctions or failures with the airplane or engine
that would have precluded normal operation. 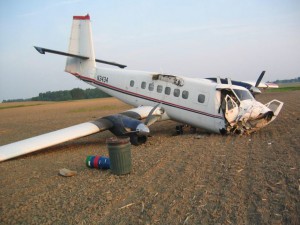 The purpose of the flight was for the second pilot to perform an evaluation of the first pilot, who was recently designated by the operator as a backup pilot. Following several successful flights with and without passengers, the pilots discussed single engine operations, and the first pilot reduced the right engine’s power to flight idle and feathered the propeller.