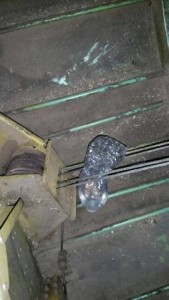 Who shoved a bottle into the side wall of a Twin Otter will never be known. However, where it ended up was found during an inspection. How long it had been there is only limited by the last time this inspection was required. But having any object jammed between control cables can lead to obviously negative consequences. If you see someone entering the plane with any object they may not intend to take with them on a jump ensure the disposition of that object will be known. The same mechanic who provided this photo also found a Red Bull can under the floor previously but doesn’t have a photo.

Consider establishing a DZ policy of no drinks on operating loads or maybe have a trash bag near the pilot seat (thinking turbine aircraft) just to have an obvious place for depositing. Utilize your DZs communication avenues (Safety Day, DZ email list) to inform jumpers of their actions they may not realize are dangerous to themselves, their fellow jumpers, the pilot and the DZ. Nobody wants an out of control jump plane careening into the nearby neighborhood.