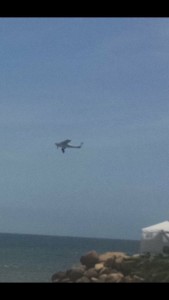 Reports are coming in a Cessna 182 accident. A tandem pair got hung up on the step attempting to exit. The pilot descended and according to witnesses the TI deployed drogue and main parachute while the aircraft flew 50 feet about the ocean. The plane immediately nosed down and impacted water. The pilot survived but the tandem pair are missing and presumed dead. The aircraft sank in reportedly 1000′ deep water.

The TM should have a hook knife. The Pilot should have access to a hookknife. However, the TI may not have been able to reach the hang up. And, do you really want to cut your leg strap? Hung up by a bootie? Sure, go for it.

BUTTTTTT!!! Listen up DiverDrivers! You need to consider how much fuel you have AND STAY AT ALTITUDE AS LONG AS YOU CAN!!! Why descend and then fly around? Take away altitude in the case they DO get free? Why? Falling from 50 feet can kill you in water. Impacting water above 60 mph is like hitting concrete. Water is incompressible.

Years ago a jumper snagged a bootie on the step of a 182. Attempts at freeing him were unsuccessful. After exhaustively talking about options with people on the ground they had emergency personnel in place and they landed in the grass next to the runway. The jumper basically walked away from it.

Student in Tow used to be something all jump pilots had to learn as the most common method of student training was static line. Now, jumpers never learn this. DEPLOYING YOUR PARACHUTE WHILE IN TOW WILL KILL YOU!!!!! And possibly others on the plane.

1. Know your aircraft and know how you are going to exit. If this is the first time doing a tandem out of a 182 maybe it would be a good idea to have your “student” be an experience tandem instructor or at the very least an experienced jumper.

4. Gas is time. When in an emergency you must think about how much time you have and SLOW DOWN! Altitude is life. Takeoffs are optional. Landings are mandatory but landing RIGHT NOW may not always be mandatory.

5. Circling over water because “it’s softer”….do you have floatation devices? Trapped in something that will sink….is that really a good option?

6.Cessnas were designed to land on grass. Consider it. People HAVE survived landing attached to the plane.